One of India’s most distinguished Editors and public intellectuals in recent decades, Shri Om Thanvi is the First Vice-Chancellor of Haridev Joshi University of Journalism and Mass Communication (HJU).

In a 44-year career in journalism, Shri Thanvi has been a well-regarded writer, speaker and thought leader across continents. Besides his core competency of journalism, his interests range from literature, arts, culture, theatre and cinema to history, anthropology, social sciences and the environment.

Executive Editor of the renowned Hindi newspaper Jansatta till 2015, Shri Thanvi began his career as a freelance journalist in the desert town of Bikaner in 1977 after finishing his Masters in Commerce (Business Administration). He joined the reputed Rajasthan Patrika Group at Jaipur in 1980, where he led the editorial team of its weekly Itwari Patrika and later, the paper’s Bikaner edition. 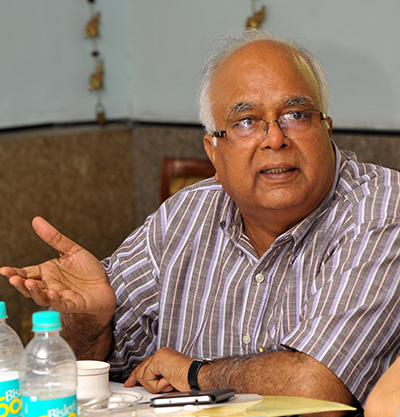 Shri Thanvi joined the Indian Express Group in 1989, as Resident Editor of the Chandigarh edition of Jansatta. In 1999, he took charge of the daily in Delhi as its Executive Editor and edited it for 16 years, continuing its rich legacy of high standards in ethics, language and style, and shepherding its emphasis on social, political and cultural concerns.

Besides writing and commenting extensively on current issues across print, electronic, social and online platforms, Shri Thanvi has also written on cinema, art, literature, archeology, architecture and language. He has taught journalism at the Centre for Media Studies, School of Social Sciences in Jawaharlal Nehru University (JNU), New Delhi. Before launching the HJU, he served Rajasthan Patrika as it's Consulting Editor.

Shri Thanvi has travelled around the globe and written a number of travelogues in newspapers and magazines. His critically acclaimed book Muanjodaro (2008) on the Indus Valley's great centre Mohen-jo-daro, fetched him the prestigious SAARC award. He has edited two volumes of memoirs, Apne-Apne Agyeya, to mark the centenary of one of the doyens of Hindi literature and journalism, S.H. Vatsyayan 'Agyeya' (2011). He has also edited a book Kaha-Ankaha (2015) on literary and critical contribution of Purushottam Agarwal. A collection of Shri Thanvi's articles on contemporary issues Anantar and another on art and cinema Roop-Aroop are in print.

Shri Thanvi was awarded the Ganesh Shankar Vidyarthi Puraskar for his contribution to Hindi journalism by the President of India (2003). He has also been been a recipient of Haldighati Award for Journalism (2003); SAARC Literature Award (2012); Shamsher Samman (2013); Hindi Academy Award (2016); Madhavrao Sapre National Journalism Award (2014) and Bihari Samman (2015).