Meena Sharma has been a well-known journalist and a versatile electronic media host. In 2016, President of India bestowed Nari Shakti Award upon her for an outstanding contribution in the field of journalism. This is the highest national award for women in the country.

Starting her career with All India Radio, Dr Sharma has experience of more than twenty three years in all the genres of journalism including radio, print and television. Besides AIR, Dr Sharma has worked on various editorial posts in Doordarshan, Zee News, Sahara Samay, Focus News, TV 18 Network, Patrika TV and has some remarkable shows to her credit. Her contribution towards social uplift won her the most prestigious Pannadhay National Award established by Maharana Mewar Foundation.

Dr Sharma directed and edited a serialised programme of women achievers ‘Abke Baras Mohe Bitiya Hi Dijo’. The women who featured in the this programme were later honoured by the President of India during a Republic Day function.

As an investigative journalist, Dr Meena Sharma (with Shripal Shaktawat) exposed the scale and problem of female foeticide before the country. 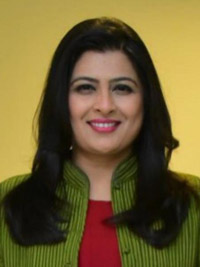