Sanjay Sharma has worked with PTI, The Times of India, The Tribune, The Sunday Guardian, The Mainstream and News India channel in leadership roles for more than 25 years. He has worked in the capacity of Editor-in-Chief with News India channel, Resident Editor with The Sunday Guardian and acting Resident Editor with The Times of India. He has also reported on a wide range of issues like local bodies, legislature, judiciary, politics, business & economy apart from spirituality. One of his reports on Punjab was published by the TIME magazine.

He has participated in unofficial deliberations on climate change in France and reported from Pakistan, Sri Lanka and Malaysia. He has been a member of the Board of Studies of Haridev Joshi University of Journalism and Mass Communication along with other Universities.

He has contributed in deciding syllabus for Psephology and Data management. He has taught at NIMS University in the department of Mass Communication and Journalism. Sanjay Sharma also founded an organisation 'Dialogue Highway Trust' along with Internationally-renowned food policy analyst Devender Sharma. The Trust is associated with 'Dialogues on humanity' in France.

During his editorship at New India channel, YouTube subscription of the channel reached from 2,000 to 2 lakh in a year, which created a 'record'. Sanjay Sharma has been an active member of 'Indo-China Friendship Association'. He has addressed several international conferences on a range of issues. He has also been a jury member of People's Commission on Human Rights in Punjab and Rajasthan. He was one of the petitioners in Punjab and Haryana High Court along with a public-spirited lawyer to get service charge abolished in Chandigarh. 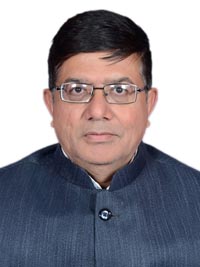