Shri Kalraj Mishra was born on 1st July 1941, in Malikpur (Saidpur) village, Ghazipur district, Uttar Pradesh, in a middle-class farmer family. After obtaining his Master's degree in Arts from the Mahatma Gandhi Vidyapeeth in Varanasi, Shri Mishra has been consistently active in public life. After serving as a Union Cabinet Minister and later occupying the position of Governor of Himachal Pradesh, he took oath as the Hon’ble Governor of Rajasthan on 9th September 2019.

From 2014 to 2017, Shri Mishra was the Minister of Micro, Small and Medium Enterprises in Government of India. Initially, after getting elected as a member of the Rajya Sabha in 1978, he was a member of this prestigious house for three terms since 2012. Meanwhile, between 1986 and 2001, he was thrice chosen as Member of the Uttar Pradesh Legislative Council and was elected as Member of Uttar Pradesh Legislative Assembly in 2012. While he was a legislator, Shri Mishra won the Lok Sabha election from Deoria (Uttar Pradesh) in 2014 and became a Union Minister. Earlier, between 1997 and 2000, Shri Mishra served as a Minister with important portfolios, including Tourism, Public Works, and Medical Education, in the Uttar Pradesh government.

Serving as a member of four legislative bodies, Shri Mishra gained comprehensive legislative experience. He was nominated on the panels of the Vice-Chairman of Rajya Sabha and the Speaker of the Lok Sabha. Apart from being Member, Standing Committee on Defence, Chairperson, Joint Committee on Offices of Profit, and Chairman, Committee on Subordinate Legislation (Rajya Sabha), he was also Chairman, Legislative Harmony Committee, Uttar Pradesh Legislative Council. 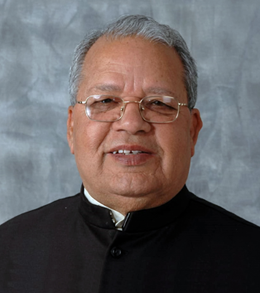 Shri Mishra has been the founder-member of the Bharatiya Janata Party. After serving four terms as the General Secretary of the BJP, he also efficiently handled the responsibility of the State President of BJP in Uttar Pradesh. Earlier, Shri Mishra began his public life as the Pracharak of the Rashtriya Swayamsevak Sangh (RSS). He was appointed as the Organization Secretary of the erstwhile Bharatiya Jana Sangh for Eastern Uttar Pradesh. In the seventies, he served as Co-ordinator of Northern Uttar Pradesh during the Sampoorna Kranti movement. During the emergency, Shri Mishra was imprisoned in Deoria jail for 19 months. After the merger of Bharatiya Jan Sangh with the Janata Party, he presided over the co-ordination committee of youth organizations belonging to the different constituents of the party. He was the first elected president of the Bharatiya Janata Yuva Morcha. In the movement for the creation of a separate Uttaranchal from Uttar Pradesh state, Shri Mishra assumed the role of co-ordinator of the sub-committee of the Uttaranchal Creation Committee of the Uttar Pradesh Council of Ministers.

Shri Mishra toured Russia, North Korea, Japan, China, and Hong Kong as a member of the Indian Goodwill Delegation in March 1979. In 2004, he participated in the parliamentary delegation to be a part of the 59th Session of the UN General Assembly. He visited Dallas (U.S.A.) as the Chief Guest at the International Hindi Convention of the United Nations. Apart from this, he has also toured Australia, Canada, Germany, Greece, Portugal, Rwanda, South Africa, Spain, and the U.K.

Shri Kalraj Mishra has contributed many articles on various socio-economic issues in Hindi and English newspapers and periodicals. Apart from this, he has three books published: Entrepreneurship in India, Hindutva - a way of life, and Judicial Accountability.

Uttar Pradesh received its first award as the Best Performing State in Tourism from the Hon’ble Prime Minister during Shri Mishra’s tenure. As the Minister of Public Works and Tourism in Government of Uttar Pradesh, he prepared the road development policy of the state. He was responsible for beginning a road revolution by increasing the quality of the roads, repairing highways on a large scale, and conducted a campaign for wide and pothole-free roads.

As the Hon’ble Governor of Rajasthan Shri Mishra is the Chancellor of all the State funded universities of Rajasthan. Apart from this, he is the President of the Red Cross Society, Rajasthan State Branch, Chairperson of West Zone Cultural Centre, Udaipur, Rajya Sainik Kalyan Board of Rajasthan and Management Committee of Amalgamated Fund for the Benfit of Ex-Servicemen of Rajasthan and Patron of Bharat Scouts and Guides of Rajasthan.